Toy Story 3: The Beginning of the End for Twitter?

Every couple years, as we’ve seen, a new Social Media platform rolls out – one that promises to be more intuitive, more fun, and more useful than it’s predecessors.

Myspace: Yeah, it used to be cool

Myspace came onto the scene SEVERAL years back and represented the first major splash into the Social Media scene – but before long, the new shininess wore off as Myspace became plastered with advertisements, and started offering options that, quite frankly, overwhelmed users. Other than the music scene, most of us don’t find any value in Myspace (I deleted my profile years ago).

Enter Facebook – a simpler platform that, at it’s initiation, was focused purely on the college demographic, requiring you to have a college e-mail address to register. Facebook was cleaner, sleeker, and focused on making connections and building online relationships, even if it was connections from the kegger the weekend before with that one girl you barely remembered taking shots with.

Facebook is still huge, but users have been jumping off the bandwagon for some time now. Facebook opened it’s doors to anyone and everyone. I knew it had lost some of it’s touch when my Mom started poking me and inviting me to Farmville every day. The options and applications, combined with privacy issues and the incorporation of Facebook ads led people toward the next best, simpler platform. 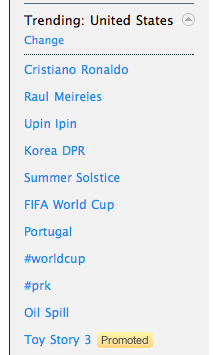 And so we have Twitter. Simplicity in it’s most pure Social Media form, at least to date. No detailed profiles, no photo albums, very few issues with privacy, and literally forcing you to keep your thoughts concise (140 characters is a way of life for many of us these days).

Many of you may have noticed Toy Story 3 popping up in your Twitter stream and showing up in the sidebar with a ‘Promoted Trends’ label (shown on the right). The question is, does this subtle form of advertising signal the beginning of the end of yet another Social Media platform?

The Evolution of Social Media

Twitter is a business – and as a business, they have to make money. The tricky situation is that, while money-making is critical, how can you go about it, how can you make that shift without losing your ‘customers’ in mass quantities? We’ve seen it happen time and time again – is this the natural evolution of Social Media?

And of course, somewhere in there, bloggers start debating about the future and money-making model of Social Media, because, after all, that’s what us bloggers are here to do.

Here’s what Twitter had to say about the use of Promoted Tweets and what we can expect in the future:

Before we roll out more phases, we want to get a better understanding of the resonance of Promoted Tweets, user experience and advertiser value. Once this is done, we plan to allow Promoted Tweets to be shown by Twitter clients and other ecosystem partners and to expand beyond Twitter search, including displaying relevant Promoted Tweets in your timeliness in a way that is useful to you.

“Relevant Promoted Tweets” sounds a lot like Google Adwords and Facebook advertisements. Yes, they can be ‘targeted’ based on location, keywords, etc – but that doesn’t necessarily mean they’re useful to me – in fact, most of the time they’re not at all.

So where’s the cut-off? What do you see as the future of Twitter and Social Networks in general? How can these companies make money through TASTEFUL advertising? Or is that even possible? Is this rise and fall of one business after another inevitable?

Sound off in the comments below. Looking forward to hearing your thoughts…