Spirituality and Social Media: Where Faith Gets it Wrong

Over the past month, we’ve taken an in depth look at the relationship between ‘spirituality and social media’. Gavin has taken us on a technological and theological journey – giving us a lot to think about as we continue on our paths toward enlightenment. In this week’s final installment of the series, Gavin discusses society’s dependency on the web, and how spiritual communities are failing to utilize social media to it’s maximum potential. Be sure to visit Gavin on the web at www.gavoweb.com and follow him on twitter: @gavoweb

As Matt has mentioned, I love South Park. In all its raunchiness I feel its social commentary is spot on. One of my favorite episodes is from season 12 called “Over Logging” and it deals with the loss of the Internet.

The episode goes something like this: The whole world is without the Internet and people don’t know what to do. There is no news. Towns become deserted wastelands. People do not know what day of the week or month it is. Eventually Stan’s dad (Randy) takes the family ‘out west’ to Silicon Valley which still has “limited inventory” –  Eventually the family finds themselves into a displacement camp for people who are seeking Internet. The problem is that there is only enough Internet for people to have 10 seconds or so to be online. It is a telling episode on how we rely on the Internet for so much of our human conditions.

One of the other crisis’ is Stan’s sister (Shelley) has an online boyfriend whom she cannot talk to through all this. She pines and whines throughout the episode. Poignant, maybe prophetic, is a moment towards the end when Shelley runs into her boyfriend in real life in the displacement camp. They have this awkward moment where they have no idea how to communicate with each other in real life.

Marshal McLuhan, considered by many to be the most prophetic voice during the new media age of television in the 60’s and 70’s, would say that that, with the advent of a new medium the old medium becomes the content for the new medium. This is true for many practices of  today’s religious institutions. I am even guilty of it myself.

If you do a particular search through iTunes for a preacher, church, denomination, or faith expression (Christianity especially) what you will find is an abundance of ‘sermon podcasts.’ Now, podcasting is or was not developed with the idea of sermon delivering. It was more the creation of using RSS and audio development technologies into crafting radio type shows, which even then is using an old medium content. But the religious players said, ‘Hey what do we have that makes for good audio? Sermons!” What do I think about sermon podcasts? I think they are lame. They are lame, not because you’re putting out some of your institutions created content, but because you are not going far enough. They are not search-able (no transcripts). They are not attractive to people outside of your own congregation, and if they are, its probably because you have a popular pastor who has written books or something that people have already conjured up an invested relationship toward and a podcast is just another outlet to continue that relationship.

It’s not limited to just podcasts. Early church or institutional websites were more an extension of the paper church newsletter. Churches are now starting to use videos and modern technologies to convey announcements. Twitter, Facebook, Myspace and other web 2.0 sites are utilized not for cultivating conversations, but to direct traffic to a main website which, again, looks like the newsletter. I am not saying all this is bad, but what I am saying is that we in the faith community need to name what we are doing for what it is. This isn’t an outreach but more a communication to our own people with the same old stuff that they stopped listening too. No wonder people still ask me what this or that events are.

Your doing it all wrong! 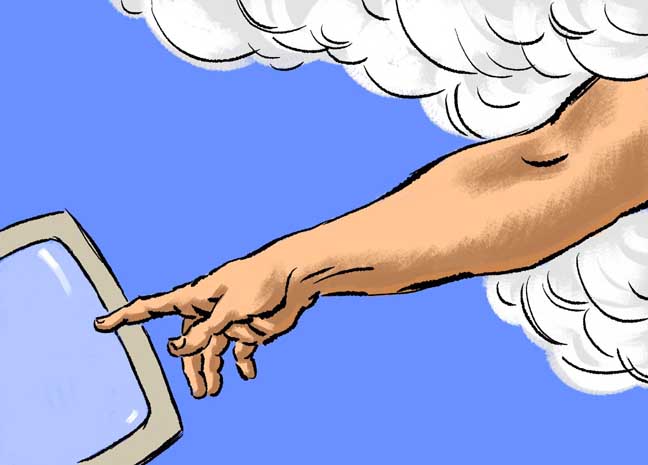 I see two problematic paths that faith communities are going down with the increased use of social media. One, is that faith communities still continue to fail to see the true value of the social networking to promote conversations, develop extensions of relationship, and to reach out to people who are seeking answers/meaning/understanding/and so on. More often what we do is take these tools and repopulate them with our standard old medium messages that are speaking out to people and not with people.

Two, coming back to our South Park displacement camp, I feel that our faith institutions and individuals are spending so much energy in the realm of social media, speaking out to perceived audiences,  that in the off chance they do happen to encounter someone in real life they’ll be at a loss for how to communicate. We’re starting to witness people becoming TOO engrossed and dependent on technology. I see this already in our youth culture who is willing to pour their heart out over the Internet and via text messages, but if we were sitting in a small group or chatting in a coffee house face to face, they bottle up and become much less transparent.

For many of us who grew up before a digital native was born we know what it is like to ask hard face to face questions, dive into ourselves and identify hurts and joys so we have the ability to lead them. However, if we have lose ourselves and fall victim to advancing technology, we lose a part of communication that is absolutely critical to the pursuit of faith and development. Technology is an invaluable tool, that if used correctly, can expand our influence and reach to virtually limitless boundaries.

Where do you see our dependency on tech heading from here? How can spiritual affiliations and groups use social media tools to benefit their cause and reach their communities?