Raising the Bar: A Recap of My First Marathon

“Whether you’re running 12.6 miles, running a marathon, or running a business – you have to keep going. It may not be pretty, you may not break any records or set the world on fire. But if you keep going, ignoring the people laughing about your Rocky moves and hand dances, ignoring your own self-doubt, ignoring how uncomfortable the chafing may be (too much?), ignoring your fears; If you keep going, that is literally all that matters.” – Matt Cheuvront

Sometimes your own advice is the best advice. 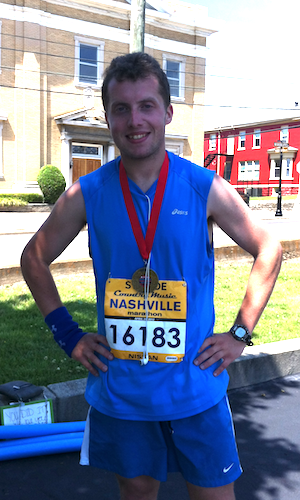 On Saturday I ran my first marathon. 26.2 miles. It was, without a doubt, the most difficult thing I’ve ever done.

At the starting line, I felt like everyone else. Nervous, anxious, excited. Months of training, hundreds of miles ran, and here I was, ready to finally take on what had always seemed like an impossible challenge.

The gun sounded and I was off. Feeling great. Keeping a steady pace. Enjoying the sights and sounds. This went on for about 10 miles without a hitch. I was on pace to hit my goal time and everything felt great.

Then I decided it was time to turn on some tunes – because – after all – I had spent weeks compiling the “perfect playlist”.

And of course, my iPod is dead, broke, or just decided to be a piece of shit. Maybe all three.

If you know me at all, you know that running without music is the bane of my existence. Listening to breathing and the sound of my feet hitting the pavement is my worst nightmare. And yet, there I was, not even halfway through the race, with no Coolio, no Sisquo, to help keep me motivated.

Frustrated as I was, I kept putting one foot in front of the other. That is, until around mile 18. Where I hit the wall. Yes. THAT wall. The one you always hear about but never understand until it happens. The kind of wall that leaves your body saying, “Hell no” regardless of how much your mind says, “Yes”.

For the first time in my history of running, I felt angry. And above all, disappointed in myself. As I slowed to barely a jog, and finally a walk, my mind wanted me to push through, to fight the pain, but my body simply couldn’t. I was sore, tired, thirsty, hungry, and outright uncomfortable in just about every way you can imagine.

So I walked. Then I walked some more. And a little more. I jogged a few steps, and quickly went back to a walk. Hands on hips. Sucking wind. It wasn’t a pretty sight.

23. 24. My walk had slowed to a crawl. I frustratingly hit the PLAY button on my iPod. Nothing. I listened to the other marathoners around me, complaining. Gasping for air. Keeling over in the grass to stretch. I started to doubt if I’d ever cross the finish line, or if the ambulance would eventually come pick me up with the rest of the stragglers.

As my goal of finishing in under 5 hours become a distant memory, finishing with a “good” time turned into something much more important. Finishing.

The past couple days since the marathon, I’ve beaten myself up for how I performed. For not being able to push myself more. But today, I’ve began putting everything into perspective.

The bottom line? I finished. I finished a motherfucking marathon. I did something I never thought I’d be able to do, and something that most people never do in their life. And in the process, I learned a lot about myself, and what I’m capable of.

Today, I realize why I’m so disappointed in my final time of 5:55 in the marathon. It’s because the bar has been raised. My bar. I’ve raised the bar on my life, and what I expect and demand for myself.

A year ago I was carrying an extra 50 pounds of weight. I could barely run a mile. I was unhealthy and uncomfortable. Today I’m complaining about hitting the wall at mile 18. Big, huge difference.

I’m hard on myself because I never, ever want to limit the expectations of what I’m capable of. Whether it’s running a marathon, or running a business, I continue to raise the bar on how I live.

The bar has been set. I’ve run a marathon. Now it’s time to raise it.

When I crossed the finish line, everyone asked if I’d ever do it again. I said, “Hell no!”

It didn’t take me long to change my mind. Today I signed up for my next 26.2. In October, I’ll give this another go.

I’ll work harder. Do better. Run faster. And get stronger.

That’s the thing about marathons (literally or metaphorically). They smack you in the face, kick you in the ass, make you feel like shit, but keep you coming back for more.

Because the biggest rewards in life are the one’s that have to be earned.

Running marathons isn’t about the miles. It’s about the lifestyle. It’s about giving something your everything, then a little more, even when there’s absolutely nothing left to give.

Because that, my friends, is the way life ‘oughta be lived.

Starting next week, I’ll be sending out a new weekly newsletter dedicated to running – a no BS, inspirational, and hopefully motivational look into the lifestyle of a runner, the ongoing training, and the countless playlists that keep you from thinking about how much it sucks. Running has changed my life, and I believe it can change yours, too. To sign up for the new (Running) Without Pants newsletter, click here.