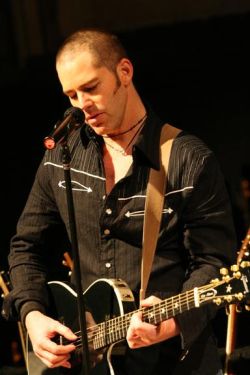 JR Richards, musician and lead singer of Dishwalla, a band infamously known for their song ‘Counting Blue Cars’ – one of the biggest alternative rock songs of the 90’s, and a song that has been both a blessing and a curse for the band. While it put the band on the map and made them a lot of money – it’s had them labeled by many as ‘one hit wonders’ and truthfully, it’s not really what Dishwalla is about.

Five albums down, Dishwalla is one of the most underrated bands of the past couple decades. JR is an extremely talented songwriter with an outstanding range of vocal talent, and the band, as a whole, has taken bold strides toward taking on some pretty weighty topics, constantly questioning ‘What Life’s About’.

It was an unexpected pleasure for me to sit down and chat with JR recently about the band’s history and transformation, life, music, and his upcoming solo project. Please do yourself a favor and check out their music, they have a ton of great tunes to offer. And connect with JR himself on Myspace and Twitter.

LWP – First of all, thanks a ton for taking the time to reach out and answer some questions. It’s amazing how these social networking sites (in our case Twitter) can bring together artists and their fans. Talk a little bit about who you are. Most people know the band Dishwalla, but tell us about yourself, the band, and how you guys came together.

JR – I’ve been the lead singer / songwriter for Dishwalla since 94 and after that much time together I guess you could say I needed a break. So the last few years I’ve spent writing and recording a solo record. Its called ” A Beautiful End” and will be released May 12th.

LWP – Has music always been a part of your life? Was becoming a rock star your childhood dream?

JR – Music has always been a part of my life. I grew up in a family where everyone sang and/or played an instrument. So I did the same. The rockstar thing just kind of happened on its own.

LWP – I guess you can’t try to be a rock star, it just happens, eh? The first thing people think about when they hear your band’s name (and don’t shoot me on this one) is ‘Counting Blue Cars’. Talk a little bit about that song – how has it propelled your career? Does it get annoying to have some people only know you by that song?

JR – Yes Yes its true. Counting Blue Cars was both a blessing and a curse. Its great to have had such a huge song in the world but it became so big that I think many people found it hard to hear beyond it. Its a great song but I’ve written better ones since then.

LWP – Do you see a lot of folks considering Dishwalla as a one-hit-wonder (there were so many of those in the 90’s)? Counting Blue Cars is still a hit and get’s a ton of radio play, even today. Have you gotten to the point where you’re tired of playing it?

JR – I’m sure that many people see it that way…I can’t change that. That first (Dishwalla) record will be considered a classic.  -LAUGHS- Crazy…and pretty cool but I’m also enjoying doing something new.

LWP – It will always be a classic in my mind JR! Now, you have an extensive library of albums you’ve released (all of which are awesome by the way). Talk a little bit about the evolution of the band and where you are today.

JR – When we started we were pretty young but that changes quick when you have a hit record. We tried hard to keep our heads together and evolve though that can sometimes disappoint fans, and sometimes the label as well – LAUGHS- But that’s art for you. Mainly, as you grow older a bands priorities change,  as well as its members. That means the music is going to change too – and without even trying. This solo record is just part of that.

LWP – Three of my favorite Dishwalla tunes are Opaline, Give, & Truth Serum – What is your all-time favorite that you’ve written?

JR – Those are good ones…in fact all those songs were ones where I was trying to do something different. I think my favorite so far though is “Until I Wake Up”. I do have a new favorite from the new record. A song called ‘The Far End of the Black”‘. It has that same kind of magic for me and reminds me of an older Fleetwood Mac tune.

LWP – One question I always like to ask – where do you draw your inspiration from? Talk about the songwriting process you typically go through.

JR – Easy – Life. Its so beautifully complicated and there is always something to write about. The hard thing is not being distracted by the crap that’s NOT important.

LWP – I’ve been following your updates on Twitter and I know that you are in the process of working on (and releasing) a solo record. What can we expect from the new album?

JR – I really tried to do some new things with this record. Go some different directions…something different than a Dishwalla record. But because I wrote most of the songs (for Dishwalla) and its my voice singing, I’m sure there will be similarities.

LWP – Is this your first solo album? How was the process of putting this together different from working with Dishwalla?

JR – Yes, This is my first solo record. Hmmm lets see…many things were different. Mainly, I had different people play with me on the record. All great players. Kenny Aronoff – Drums (John Couger, Avril Lavine, Puddle of Mudd), Chris Chaney – Bass ( Janes Addiction, Alanis Morrisette), Rusty Anderson – Guitar (Paul McCartney, Edna Swap), Phil X – Guitar ( Methods of Mayhem, Daughtry) – and where I didn’t I played everything myself. Also making the record was very spread out time wise when my only experience up to this point was to go into the studio and not leave until finished. For many reasons I took quite a few breaks this time around. Life has been insane the past few years. Oh and one other thing that was different was that I produced it myself.

LWP – What can we expect in the future from JR Richards? Are you planning a tour with the release of your new record?

LWP – Awesome man, a couple questions to finish us out: What’s something that nobody knows about you? Give us an exclusive gem of information.

JR – Hmmmm…how bout this: My idea of Nirvana includes a Chicken Taco and a Negra Modelo.

LWP – Taco’s and beer, sounds like a pretty blissful life to me man. One last thing thatI like to ask everyone who interviews with me: My website is called Life Without Pants, so I ask you – what do YOU think life would be like if no one wore any pants.

I want to again thank JR for taking the time to do this. I reached out to him after we bumped into one anther on the Twitter-verse and, as they say, it’s amazing how the web can bring people together. Go check out their music, I guarntee you’ll like what you hear. And be sure to check out JR’s solo debut ‘A Beatufil End’ slated for release on May 12th.