I Am Internet, Hear Me Roar! How the Web Is Transforming or Destroying Your Favorite Medium [Music] 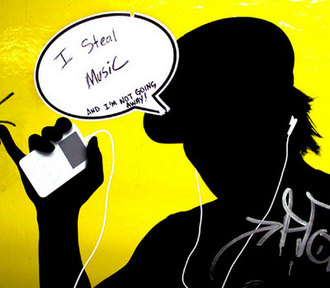 Music: Combating the ‘Power of Free’

So, this is the no brainer, and the most ‘trendy’ tech vs. old school media debate. The problem with the record industry is that they remain stubborn and (still) refuse to embrace new technology. On the same token, the record industry was built upon the basis of per-unit income on the sales of CD’s (and back to tapes, A-Tracks, records, and so on). The ratio of expensive crash-and-burns versus huge profitable successes is heavily weighted toward the former. In addition – artists pretty much get the shaft while signed with a label. After costs and deductions, a majority of label-backed musicians make very little of the overall profits.

After all is said and done, whatever profits that are left are severely jeopardized by folks like us having the ability to get any song they want, whenever they want, however they want it, at any price (including free). And once we have it, who is to stop us from copying and distributing without permission? Illegal downloading and pirating of music will never get more difficult, and will only become more and more of a common practice.

But it really isn’t all bad. The music industry might be suffering through the digital age – but the internet can and is really proving to be an extremely valuable and effective medium. As much as downloading and copying of music hurts a record label, it can actually indirectly support the artists themselves. The more music that gets copied, the more people who are exposed to it, and the more they will want to see you perform it live. This is where musicians make most of their money, performing live shows, selling merchandise at events, etc. The overall point here, is that new technology must be embraced, rather than stubbornly combated and avoided.

Those of you who know me you know I have been itching to use Trent Reznor as my example for the exception to the rule. In (short) summation – Reznor left his label in 2007, recorded on his own, distributed (digitally) two full-length digital albums since, has directly taken on illegal downloading, and has proven that an artist can be extremely profitable by embracing new technology. Prime example: Nine Inch Nails released their full length album ‘The Slip’ in 2008 for free. That’s right, completely free. You couldn’t pay for it if you wanted to. Eventually, a hard copy was released in stores (250,000 copies total) and he has already grossed millions of sales (not to mention tour revenue from last year ‘Lights in the Sky’ tour).

So, what’s the take-away here? Trent Reznor released a free album that you can still go download today for nothing, yet people continue to fork over money in store’s everywhere. What does that say about illegal (or in this case legal) downloading? It says that if there is a perceived value, people will spend money – even when they don’t have to. Trent Reznor has built an incredible relationship with his fans – focusing on connecting at an intimate level and in turn, giving the fans a reason to buy, giving his ‘product’ a perceived value that even FREE can’t compete with. Now THAT’S impressive, and it shows that determination, charisma, and ingenuity can go a long way. It also exemplifies (once again – the reoccurring theme within this series of posts) that technology and the power of the internet can be harnessed for good and be used to form connections and make a lot of money!

Overall, the future is bright for music and the musicians who make it (and most importantly) embrace the wave of new technology.

What Do You Think?

Where do you see the music industry going from here? Will CD’s eventually become totally obselete? How do you see other artists taking on illegal downloading? Is Trent Reznor a rare case because of the cult-like following NIN has had since the early 90’s? What makes you pay for something you consciously know you could have for free? Share your thoughts below.