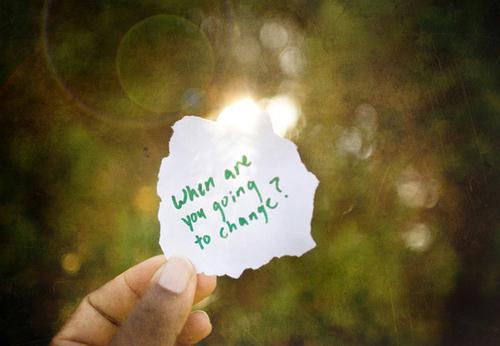 Everyone can change. Yes, even you!

My cousin Nadia lives in Russia. I love her to death and consider her one of my two best friends in the world. But within spending two hours with her, I want to bite her head off. She has an extremely complicated personality and to all attempts at suggesting to change, she replies with “I cannot change anymore. I am a grown person and my personality has formed.” She is 22.

I am a firm believer in that we can change ourselves if we really set out to do it. Change is not the hard part. The hard part is really setting out to do it. Often enough, I have pretended to myself to want to make a change in my life, failed once or twice to make that change and abandoned the effort altogether. It happens so often that getting discouraged with the thought of being able to change can completely overcome any kind of motivation.

So the central question that I ask myself is “how do I take on change so that it lasts and so that I do not give up a week into it?”

I still keep failing at change regularly, but sometimes I succeed. What makes those change “projects” successful? It is making the change I want to happen a habit in my life.

To succeed, you must fail

First, it is necessary to recognize off the bat that you will fail at the change when you first start (and probably will fail regularly for the rest of your life). For example, if you are someone who loves to snack and want to stop that behavior, quitting cold turkey on Monday morning is recipe for failure. Recognize that you will not be able to stick to the change perfectly from the very beginning and promise yourself to not give up when you fail.

Second, recognize the importance of habit-formation and the little battles. If you want to make the change to exercise more than you currently do, then exercise every time you plan on exercising. Do not let rationalization and “I will start tomorrow” postpone the exercise you planned on for today. Remember that every time you exercise the change muscle, it gets stronger. So does your habit. Therefore, going to the gym today not only yields positive health benefits, but also strengthens the habit that you have engaged in the change for. You will then be more likely to go tomorrow because you have a previous, recent experience to recall and rely on. This previous experience says: “Look, you did it last time. It was not awesome, but you did it. Which means you can do it today, too.”

Third, stay with the behavior and keep on going when you slip up, thus working it into the concept for who you are. I used to be a pretty sarcastic person, a tone which I adapted in high school, when I was not paying attention. When I started my first job in January 2009, I decided that sarcasm was inappropriate in the workplace. Every time I felt the urge to say something sarcastic, I would either remain silent or say something nice. Gradually, this habit (of not being sarcastic) spilled over into my life and became part of who I am. Now, I barely ever think of sarcastic ways to respond to people. Sarcasm no longer has a place in my self-perception.

So there you go. Change is possible and might not even be that hard. All it takes is a honest commitment on your part and winning the little battles along the way. And before you know it, it stops being change and becomes who you are.

AUTHOR BIO: I recently ‘met’ Irina after stumbling across her blog, Nine to Done where she talks about Gen-Y, careers, relationships, and life. I immediately knew she would be an awesome contributor to this series, and she was quick to jump on the bandwagon. You can dive deepr into her psyche by reading her blog and following her on Twitter. Irina, thanks for jumping into this on such short notice, you rock!