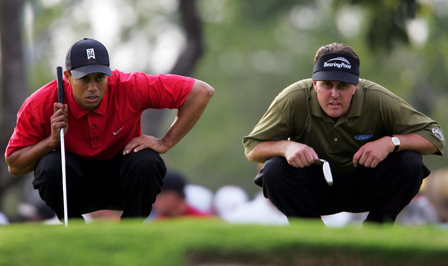 “I’ve missed more than 9,000 shots in my career. I’ve lost almost 300 games. 26 times I’ve been trusted to take the game winning shot and missed. I’ve failed over and over and over again in my life. And that is why I succeed.” -Michael Jordan

We’ve had a lot of discussion recently here at Life Without Pants about life, balance, and failure. I’ve raised the question, ‘how do you define yourself’ – Are you defined by the work you do? The people you surround yourself with, your independence, your failures, your successes? What defines who you are? What drives you and motivates you? And how to you react when handed criticism and adversity? What do you do when you try, and fail?

The Masters tournament is the epitome of golf as a sport – walking away with the green jacket is arguably one of the greatest achievements an individual can achieve. Last weekend, millions of people watched one of the most dramatic finishes in recent history. Tiger Woods and Phil Mickelson, two of the best, if not the best golfers in the world, were paired together in the final round. Playing an hour ahead of the leaders,  throughout the day, the duo swapped birdie for birdie, refusing to concede. In the end, they both lost the war to Cabrera. It wasn’t the fact that they both lost that’s important, it’s how each man handled defeat that speaks volumes.

After walking off the 18th green the press approached Tiger Woods; asking if he had enjoyed his role in a spectacle that captured the imagination of the thousands on the Augusta premises, and millions watching on television, his response was cold and grim:

“You just go about your own business. I was just trying to post an 11 under par, to shoot a 65,” he replied. “I hit it so badly warming up. I was hitting quick hooks, blocks, you name it. On the very first hole I almost hit it into [the eighth] fairway — one of the worst tee shots I’ve ever hit starting out. I fought my swing all day.”

Unlike Woods, when Mickelson was proposed a similar question, he was able to share in his excitement over what had been one of the more thrilling days for golf in years:

Their responses left a lot for interpretation – and led many to argue that Woods ‘cares more’ because of his anger and hatred of failure. Some would argue that this means he is more passionate about what he does and cares more about winning than someone who can shrug it off and smile. I disagree.

How do you want to be remembered?

There is no debating Woods’ desire. Tiger Woods is the greatest golfer ever. Period. But one of the things that seems to be missing, one of the few things he doesn’t seem to have wrapped around his finger, is the concept of humility. There are many great champions in many sports around the world that will forever be remembered. But it is those who show that their human, that they can appreciate the game for what it is, a game, and who are able to remain humble, through success and defeat, that are loved by generations. Phil gets this, Tiger does not. Woods will forever be remembered as a colossal talent, as a fierce competitor, but what will we remember him as a person? He will continue to achieve great things but at what price to his reputation as a sportsman and, more importantly, as a human being?

I’m a Phil Mickelson kind of guy – I don’t let my success and failure define who I am – no matter where life takes me, I always want to remember that there are bigger things than work, there are more important ‘defining’ aspects than my performance on a given day. Obviously, I’m not in the spotlight Woods is in, and I never will be – but wherever my life does take me, I will strive to always remain humble – to me remembered first as a good person – my career success falls somewhere further down the line of what defines my legacy. I’m that guy who can take a step back and appreciate things on a grander scale.

‘Humility’ is not synonymous with ‘apathy’

Mike and Mike on ESPN Radio had a long discussion on this yesterday – Looking at it from a sport fan’s perspective, think about watching a team you love – they lose a big game, and then afterward you see them smiling and laughing, it makes you angry. You’re sitting there wanting to punch a hole through a wall, and there shaking hands with their opponent smiling and joking around. To this, again, I think you have to take a step back – humility is not synonymous with apathy – in fact, it shows an appreciation for the ‘grand scheme of things.

Mike Ditka once said, “Success is not permanent and failure is not fatal”.

How do you define failure? How does failure define you? Are you a ‘Woods’ or a ‘Mickelson’?